2015-2016 Annual Report on the Administration of the Privacy Act

This report, prepared and tabled in accordance with section 72 of the Privacy Act, reviews the OIC's privacy-related activities for 2015–2016.

The OIC received eight new privacy requests in 2015–2016 and carried two over from the previous year. Nine of the ten requests were completed within the year. The organization also achieved the notable average completion time for these files of 17.3 days.

The OIC is an independent public body created in 1983 under the Access to Information Act. The OIC's primary responsibility is to conduct efficient, fair and confidential investigations into complaints about federal institutions’ handling of access to information requests. The OIC primarily uses mediation and persuasion to resolve complaints. The OIC brings cases to the Federal Court to ensure the Access to Information Act is properly applied and interpreted.

The OIC also supports the Information Commissioner in her advisory role to Parliament and parliamentary committees on all matters pertaining to access to information. The OIC actively makes the case for greater freedom of information in Canada through targeted initiatives such as Right to Know Week and ongoing dialogue with Canadians, Parliament and federal institutions.

Complaints Resolution and Compliance mediates and investigates complaints about the processing of access to information requests and any issues related to requesting or obtaining access to records under the Access to Information Act, and makes formal recommendations to institutions and heads of institutions, as required.

Legal Services represents the Commissioner in court as she seeks to clarify points of access law and uphold information rights. Lawyers provide legal advice on investigations, and on administrative and legislative matters, as well as customized reference tools and training on recent case law. Legal Services also monitors legislative developments to determine their possible effect on the Commissioner’s work and access to information in general.

Public Affairs conducts communications and external relations with a wide range of stakeholders, notably Parliament, governments and the media. Public Affairs also provides input to the Treasury Board of Canada Secretariat on improving the administration of the Access to Information Act. Public Affairs is responsible for the OIC's access to information and privacy function.

The OIC has a small team of specialists who carry out the organization’s access to information and privacy (ATIP) activities. In 2015–2016, the ATIP Secretariat comprised the Acting Director (full time) and the Junior ATIP Officer (part time), both supported by a consultant (part time).

In 2015–2016, the Secretariat held two training sessions for employees on their responsibilities under the Access to Information Act and Privacy Act, with a total of 23 staff in attendance.

In March 2016, the Secretariat introduced A-Tips, a regular series of tips and reminders posted on the OIC intranet to remind employees about their access to information and privacy responsibilities.

ATIP staff monitor the progress of requests to ensure they are processed efficiently, and generate reports on all open requests through the electronic case management system, for review by senior management.

The Acting Director and other OIC officials hold full delegated authority under the Privacy Act. Appendix A contains a copy of the delegation order. The OIC expects to fill the Director’s position on a permanent basis in 2016–2017.

In September 2015, the various federal tenants at 30 Victoria Street in Gatineau (where the OIC is located), led by the Office of the Privacy Commissioner, completed a multi-institutional Privacy Impact Assessment of their joint surveillance and access control and identity management security system. The computer-based system integrates several technologies, such as panic alarms, intrusion detectors, cameras, access controls, and smart identity and access cards.

Appendix B contains the OIC’s statistical report on the Privacy Act for 2015–2016. The following sets out some highlights from that report, along with some trends related to workload, timeliness and disclosure over the years the OIC has been subject to the Privacy Act.

The OIC also responded to one consultation request from another institution.

None of the requests the OIC completed in 2015–2016 were late. In fact, over the nine years the OIC has been subject to the Privacy Act, it has never completed a request late (known as a “deemed refusal”).

The OIC disclosed all the processed records for two requests in 2015–2016. The records were disclosed in part for the remaining seven. Overall, the OIC disclosed 5,751 pages, 97 percent of the number of pages processed.

In 2015–2016, the OIC claimed exemptions nine times to withhold information. The most often used was section 26 (personal information of someone other than the requester; five instances), followed by paragraph 22(1)(b) (law enforcement and investigations; three instances) and section 27 (solicitor-client privilege; one instance). These have traditionally been the most common exemptions the OIC has used to withhold information.

The OIC made no disclosures of personal information in the public interest under paragraph 8(2)(m).

The Office of the Privacy Commissioner received three complaints about the OIC’s handling of privacy matters in 2015–2016. One of these complaints pertains to missing records and the other two to exemptions the OIC applied to withhold information. Investigations into these complaints are ongoing.

One complaint from 2014–2015 about the disclosure of personal information was closed during 2015–2016 as not well founded. Investigations into three complaints from three previous years are ongoing. 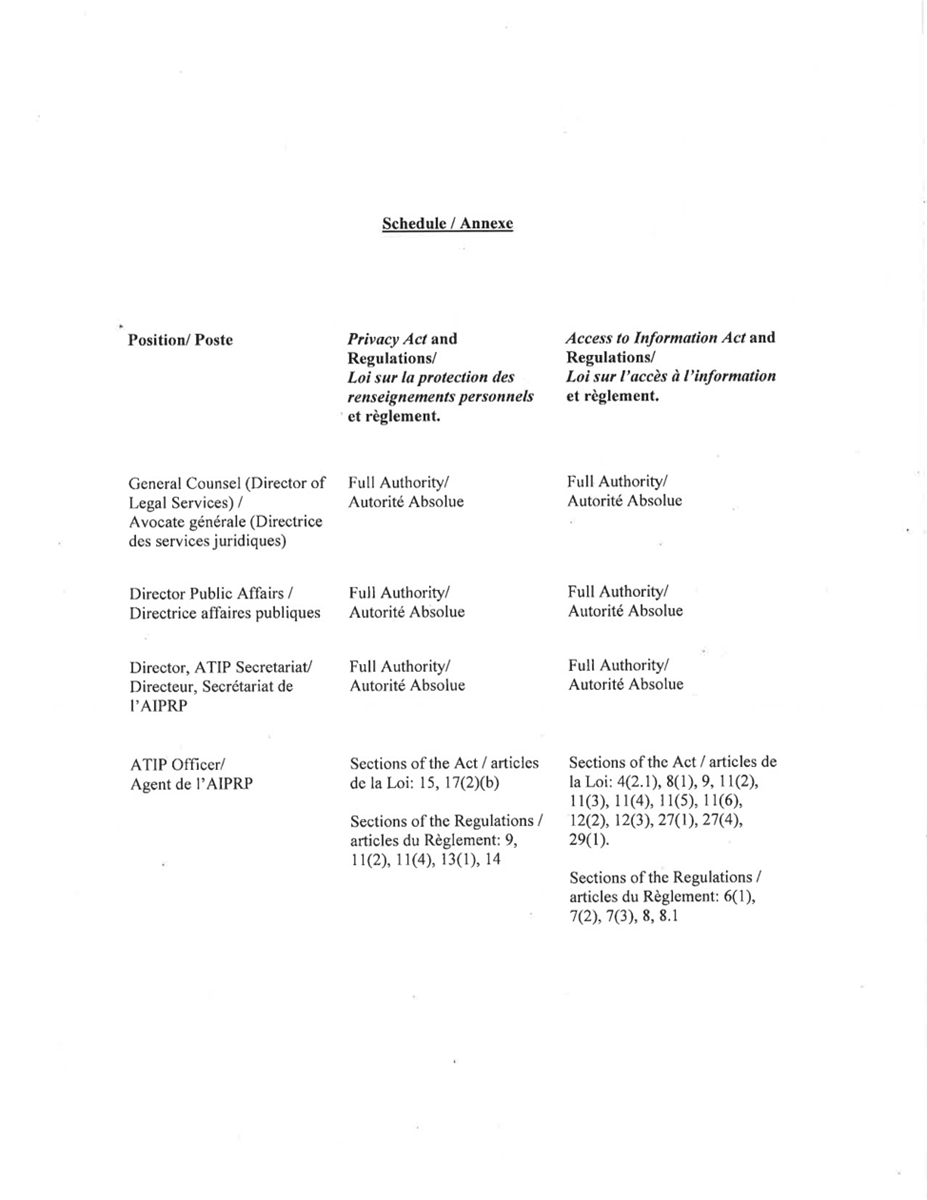 Name of institution: Office of the Information Commissioner of Canada

2.5.2  Relevant pages processed and disclosed by size of requests

2.6.1  Reasons for not meeting statutory deadline

PART 4: Requests for Correction of Personal Information and Notations

5.1  Reasons for extensions and disposition of requests

PART 6: Consultations Received From Other Institutions and Organizations

6.1  Consultations received from other Government of Canada institutions and other organizations

6.2  Recommendations and completion time for consultations received from other Government of Canada institutions

6.3  Recommendations and completion time for consultations received from other organizations